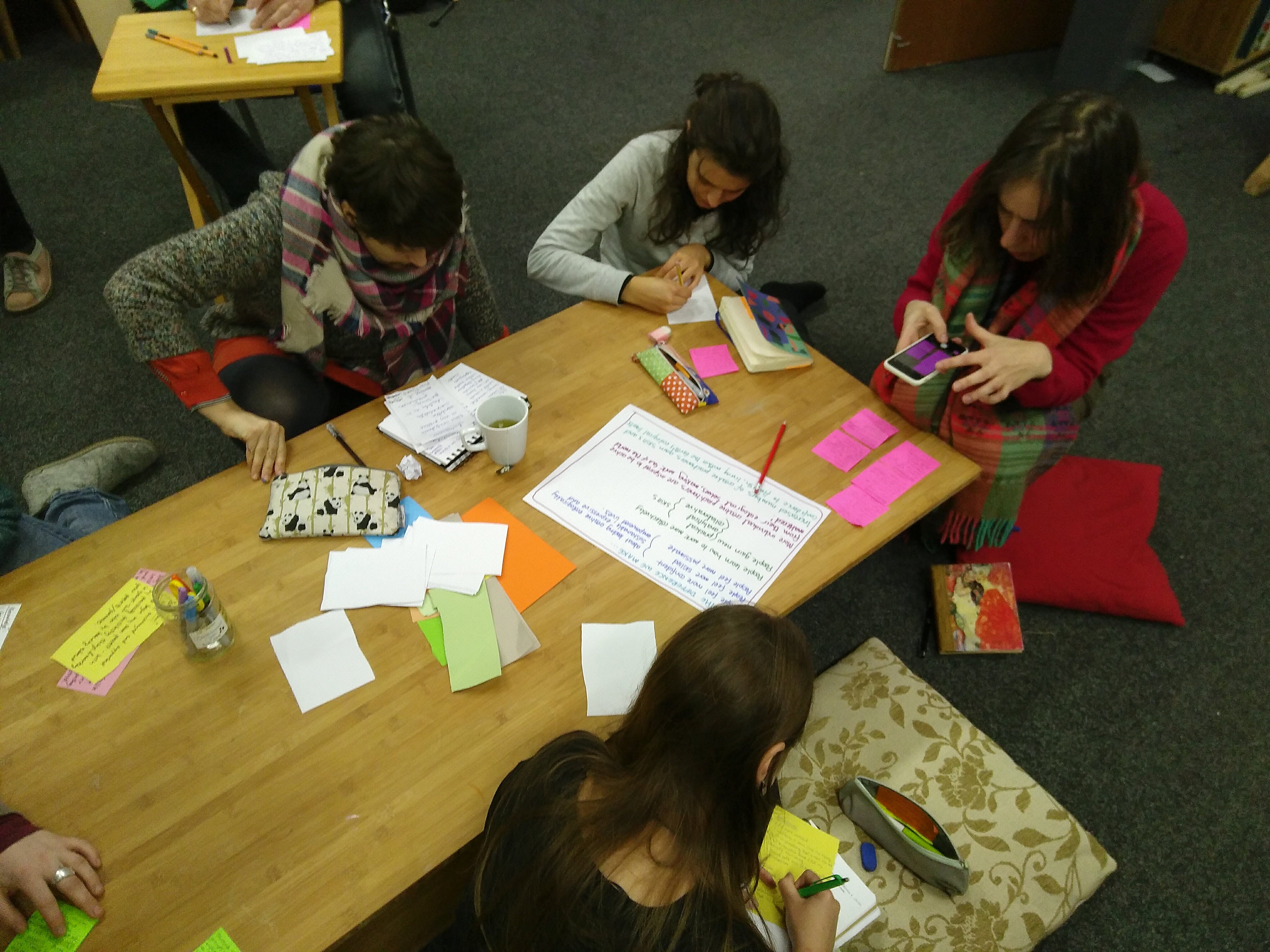 When it comes to the perennial question of how best to engage communities in thinking about the past, the present and, most importantly, the future in playful and imaginative ways, there are few more skilled and brilliant people than Ruth Ben Tovim, Lucy Neal and Anne Marie Culhane, all artists in their own right, but also all members of Encounters.  I have long admired their work and had the privilege to work with them on different things, but when the opportunity came up to train with them for a week, to really look beneath the bonnet of how they work, a course at Schumacher College called ‘The Art of Invitation’, I seized it with both hands.

The course was presented as showing participants “how to engage different communities to become involved in creative projects; bringing people together to make social, cultural and ecological change happen”.  Ruth Ben Tovim is the founder of Encounters, has run all kinds of deep engagement processes, such as the Encounters Shops and the consultation for Atmos Totnes which I was part of.

Lucy Neal is a co-founder of Transition Town Tooting, and has overseen many of their amazing community arts projects, such as the Trashcatchers Carnival, the Tour de Tooting, the recent Tooting Twirl and much more.

Anne Marie’s work comes from her fascination with natural systems and, more recently, her roots in permaculture, with projects such as her ‘Fruit Routes’ and ‘A Field of Wheat’ bringing a depth to permaculture practice that is truly fascinating.  More on each of them to follow.

The first day was about all the participants getting to know each other and why they had made the journey to Totnes for the course.  The second day started with Anne Marie giving an overview of her practice, which she referred to as being a study of being an “edge-dweller”, being fascinated in the spaces where two systems meet each other.  She works, she told us, as a mentor, an artist, a collaborator, a curator and a co-ordinator and “as anything that feels appropriate”.

Her work looks at our evolving relationship to the land and natural world (or ecology) through different lenses including work that looks at climate change and food.  It pays deep attention to beauty, design and aesthetic harmony and to the invitation.  Invitation was a theme we would return to regularly during the course. For her, planting fruit trees, harvesting surplus apples and planting fields of wheat are opportunities to “change perceptions to realise our interdependence”, or what Thomas Berry calls, in a phrase I love, “hopeful activity”.

In the next session, Ruth offered an overview of her work.  She started out with an exercise where we were able to practically experience many of the kinds of activities that you’d find in one of her events. Blackboards inviting our responses to questions such as “what makes you smile?”, “who or what do you miss?” and “what’s it like to be alive now?”  A map of the world inviting our place-specific memories. Sitting in pairs to share stories with another person, then captured on small blackboards in a sentence beginning “I heard a story about…”

Ruth’s presentation looked at the early part of her work, initially in Sheffield, after she gave up being a theatre director with a sense that she could be doing something deeper, more engaging.  She and a colleague started taking over old shops to create listening spaces, places with an invitation for people to sit and talk, to meet, to discuss, with as few barriers as possible to that happening.

In one, people picked up all the rubbish from an unloved, rubbish-strewn area, and documented and lovingly presented it all as though they were museum artifacts.  Her work is playful, with the invitation to get involved always to the front, with open doors and a real aesthetic eye to detail, down to how pens are arranged in pots, and the use of children’s toys.

In the evening, Lucy talked about her practice. Having run the London International Festival of Theatre for 25 years, she came across Transition and decided to throw her energy behind it, starting Transition Town Tooting. The Trashcatchers Carnival in Tooting was the first Arts Council-funded Transition activity, and was followed by many other great projects, including the Tooting Transition Shop, created with Ruth. She also worked on the ‘Transition Town Anywhere’ activity at the 2012 Transition Network conference.

A couple of years ago she published the amazing book ‘Playing for Time’: making art as if the world mattered’, which brought together, for the first time, a diverse collection of artists working in a similar vein. “At a time of systemic change”, she told us, “our imagination is the most important thing we need”.  “Art”, she said, “is about attention, and where you decide to put it”.  After a powerful and inspiring overview of her work, she told is “it is in our collective imagination that we’ll find the stories and invisible threads we can manifest in many ways”.

On the third day, Lucy introduced us to the 10 principles of invitation, which can “hold energy and conjur life”, which initially appeared in ‘Playing for Time’.  They were:

We were presented with a deck of cards, each one with one of these principles, to use as a checklist against which to evaluate our own projects.  We were then set our project for the next day (see photo below), to work in groups and to create an activity with an invitation, something that invites people to take part in something the offers them an experience of possibility and invites people to engage with social and ecological issues.

We worked the following morning in groups, and on Thursday afternoon, as the ‘Beast from the East’ arrived in the south west and blew swirls of powdery snow around us, each group presented what they had come up with.  My group did an activity about imagining that the blizzard was the Last Blizzard, and in which we invited people to come up with new names for snow, which I might write up here later, but each group offered a very different experience, reflecting the rich learning of the past few days, which was then given feedback by the group and by the teachers too.

On the final morning, we reflected on what we had done and learnt, and were able to ask final questions and to set some intentions for after the course.  We also, led by Anne Marie, played ‘Flip the Kipper’, a delightfully daft game, although with a serious undertone about sustainable fishing, involving a race to move a paper kipper across the room propelled only by the draught we were able to make with a rolled up newspaper.  Great fun.

And that was that. The weather was such that some of those who had travelled a long way to be there for the course weren’t sure if and when they would get home.  It had been amazing though.  For me, the key insight was the importance of the invitation, getting the invitation right.  Transition works at its best when it minimises the barriers to engagement, and consciously invites people in.

It’s not easy. It takes resource, skills, commitment, a willingness to feel uncomfortable.  It is, as Lucy said at the end of the course, work which is “of the heart – about connection”.  As she put it, “this is difficult work. It is ‘The Road Less Travelled’.  But that’s the work we have to do. And the potential is huge for remarkable things to happen”.

It gave me a lot to think about. And it was such a treat, after 12 years living almost on its doorstep, to finally do a course at Schumacher College. The wonderful space, the delicious food, the snow swirling into drifts outside the windows, the fireside conversations, the evening tango dancing, the immersion into inspiring ideas and a culture of people working together, all made it a wonderful experience.  My thanks to Ruth, Lucy and Anne Marie, to everyone at Schumacher College especially Ruth Potts (good luck!!!) and to all my fellow students, for an amazing, and deeply transformative week.