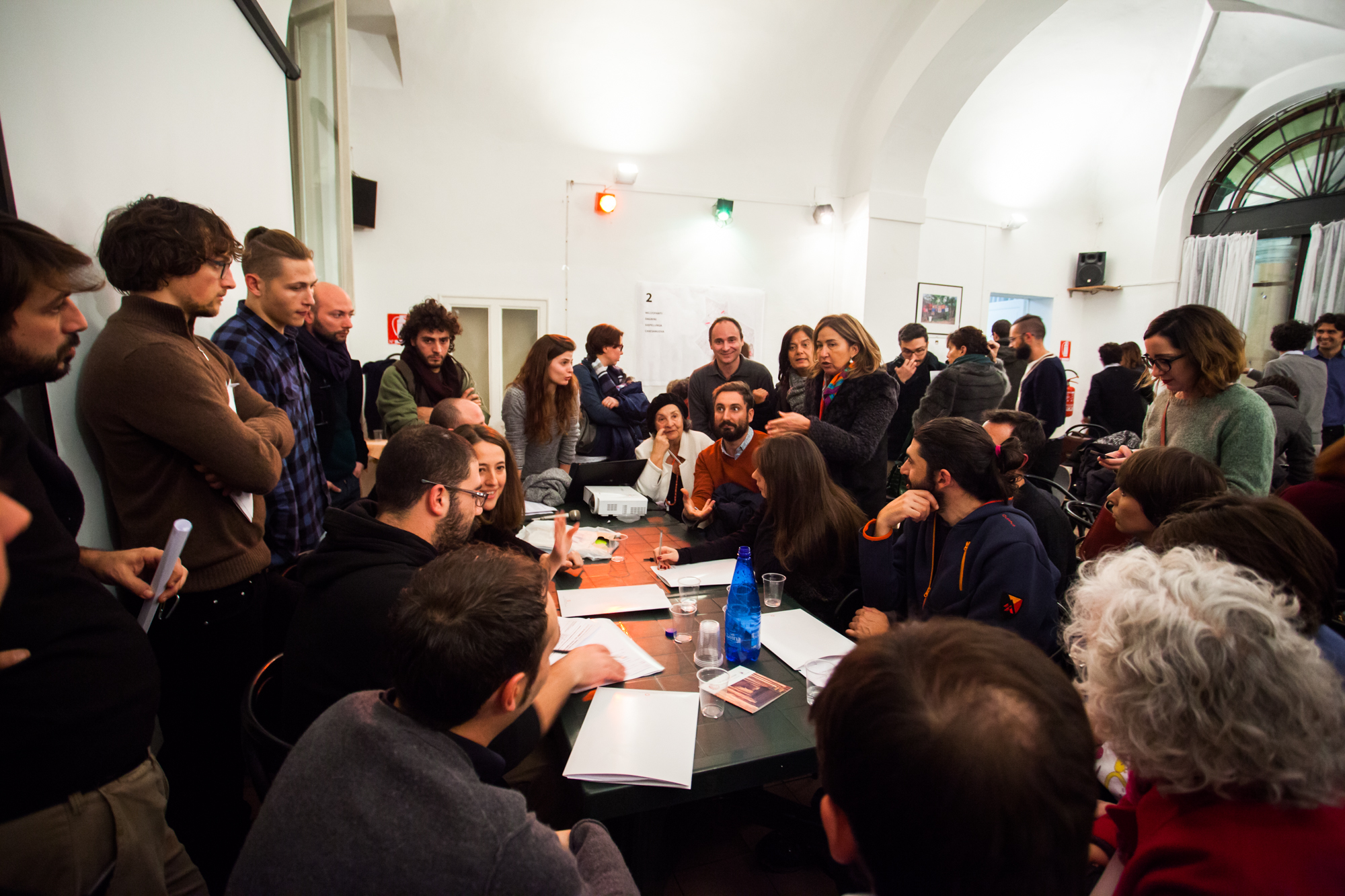 Michele d’Alena on Bologna, the city with a ‘Civic Imagination Office’.

A while ago we met Gabriella Gomez-Mont in Mexico City who has, in effect, created a ‘Ministry of Imagination’ within the city administration. I thought that was the only such example in the world, the only example of city administration seeing the value in explicitly boosting the public imagination across a city. But then I recently came across the story of l’Ufficio Immaginazione Civica, the Civic Imagination Office in Bologna, created by the city municipality, and I was fascinated.

What follows is my conversation with Michele D’Alena, Director of the Civic Imagination Office. It is a multi-professional team working to build a creative bridge between the citizens of Bologna and the administration. Michele has worked for the municipality for the past 6 years, and for the past two years within the Fondazione per l’Innovazione Urbana, in charge of the Civic Imagination Office.

In Bologna, a new approach to engagement and civic action is emerging, rooted in the imagination. One driver for this shift is the realisation we are living in what Michele calls “a distrust era”, where people don’t trust public administrations, NGOs, or private businesses.  The Civic Imagination Office’s approach is towards what Michele calls ‘proximity’ working. As he puts it, “we need people to stay on the ground, to stay with the people”. And the story that Bologna has to share with the world is, I think, vitally important. I started our chat, via Skype, by asking him how the Civic Imagination Office came to exist?  And what does it do?

“Some information about Bologna…  Bologna is a strange city because in Bologna you can find a lot of students and we have got a long tradition in the field of public participation.  You can find high social, economic and cultural impact. You can find the university, you can find Bugatti, Lamborghini, the municipality, but also the Social Street movement on Facebook.  You can find a lot of collaborative spaces.  We have an incredible co-operative movement.In this city you can find a strong dialogue, a strong tension, a strong conflict, between the top-down and the bottom-up.  This is the secret of the city.  In the last four years, Bologna municipality has begun to implement up a new approach about public policy, based on a new paradigm.  The first paradigm, the first shift, is that we cannot rely on long-term investment, and now we have projects on the short and medium terms on investment.  Designing relationships and daily uses of public spaces and urban commons.

Second shift – the distrust era.  The people don’t trust us.  So through this new way to live public policy, the Bologna municipality has begun to design different instruments.  One of the most famous is the ‘regulation on public collaboration between citizens and the city for care and regeneration of urban commons’, the co-operation pact between citizen and communities.

Also through a tender, ‘Incredibol’, to share buildings and resources with the creative communities.  Also through Iperbole, the Civic network. Bologna has an incredible history about the use of the web.  It was the second town in Europe to use the net for the civic impact (Iperbole) in 1985.  So this municipality has begun to design this instrument, to recognise the incredible way to make further chances for creativity from the bottom up.

The city now has a strong vision, on four levels.  In Bologna we want to use a different way to understand the smart city.  We are speaking instead about ‘collaborative city’.  We want to change the way of doing public policy.  Second level, we are organising a new type of instrument.  Bologna regulation, Incredibol, Iperbole, and participatory budgeting and whatever you want.  Third, we create places where people can meet the public policy, the Neighbourhood Lab.  In two years we have organised something like 280 public meetings in Bologna, involving something like 8,000 people.  Every month we organise something like 10 public meetings to share decisions about public spaces, about libraries, about pollution, about mobility, about welfare, about a lot of things.

In Bologna we have decided to organise a stable participatory process.  Every year we know that we have to organise a Neighbourhood Lab.  At the beginning of every year we design the team, with the resources, and then we go to the neighbourhood to involve the community and enterprises.  We can build up social capital, we can learn new instruments, we can learn with the people how we can do better, and we know every year much more about the city.

The secret of Bologna is that – and this is why I think we have won the Bloomberg prize or the next prize – because we don’t have a platform.  We don’t have a project.  We have a process.  We are designing new instruments right now.  We know that we can design a better city with the people for the next three years.  Now I’m designing the Labs for this year with my team, and my team is a team of 10, 12 persons.  I can decide with them better projects than last year.

Then those Laboratories in the neighbourhoods, they are very proactive?  They are going out and meeting people and making connections, and they use Open Space as well, did I read that somewhere, to get ideas?

Frederico sends the email to organise the Lab.  When we have to organise a meeting, Frederico know exactly when we can organise the meeting, what time, and when is better to send an email, who is the best community pusher of the neighbourhood, because Frederico has the social capital of that district.  This is our way to build up our proximity approach.

So then those laboratories in the neighbourhoods, they are very proactive?  They are going out and meeting people and making connections, and they use Open Space as well to draw out peoples’ ideas?

Absolutely.  We use all the methods that we have to use.  We use focus groups, focus based technology, questionnaires, online voting, whatever you want.  All the districts are different.  We can organise something for example in Pescarola, which a zone with a lot of social housing and vulnerable families.  So in that zone we can’t really use Facebook.  We do use Facebook but we also have to go there on Saturday mornings.  We have to go there when the younger boys go to the school, or when the families go to the park.

If we want to speak with those people we have to change our way of working.  And Frederico can know better than me how to do this, because Frederico has spent so much time in that place.

There are many cities in the world who are doing interesting work around climate change and resilience and these kinds of things.  And there are some cities like in Barcelona, Madrid, where they are looking at more neighbourhood democracy, participatory budgeting.  But you are the only city that I ever heard of who says we need to explicitly talk about imagination, and imagination has a role to play in how we connect all of these things.  Why is imagination so important for you?  Why not just say it’s democracy, it’s climate, it’s social justice?  Why do you explicitly talk about imagination?

We need to have more resources.  At the beginning I was very sceptical about this word because I think that we have to have a very practical approach to the people’s problems and needs and capacity.  But after two years of work on the ground, I have learned that ‘imagine’ is one of the most used verbs in the Assemblies.

The people want to imagine a new way to solve problems.  ‘Imagine’ is a very simple word.  Everybody understands what it is. It is a clever way to speak about how to solve problems in a new way. It’s a funny word also for marketing!  The secret is that beyond the word imagination is that there is a team.  A team with resources, with a strong political view, to push forward the Bologna municipality approach.

Our secret is that we have people to organise a better way to design public policy.  We can use another word, but the point is that we have a team design to link decisions with a new way to have data about needs and capacity.

If you, rather than just working in Bologna – I know politics in Italy is very complicated at the moment – but if you were the President of Italy and your job was to say we want Italy to be as imaginative as it could possibly be – we want to take this idea of imagination and have it as a national approach, so ‘Make Italy Imaginative Again’ was the slogan when you were elected, how could you take the learnings of what you have done in Bologna and do them for a whole country, do you think?

We need people and organisations that organise mediation with the people.  That use the work on the ground to understand the new needs.  All of our structures, whether welfare, mobility, or whatever you want, were based on the last century, the 19th century.  So we need flexible spaces to allow experimentation, to rethink to work around hierarchical administration.

For a way to understand behind a city with a region, or national approach, we have to open new ways to understand our work, going beyond the way to organise public policy with a team able to manage the public engagement.  This is the secret, with a stable period of work.  We don’t need six months.  We need three years.  We need fifty young managers in Emilia Romagna (the larger region Bologna sits within) to understand what we have to do for a better future.  We need people, managers of proximity and time.