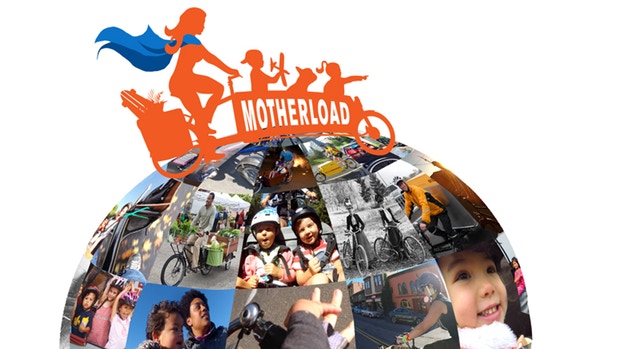 When I do talks, I often include an exercise where I invite people in the audience, sitting in pairs, to travel forward in time 11 years to the time when we have attained a zero carbon society. I invite them, in their pairs, to sit in silence for a minute, using their imagination with all its senses, to see what they see, hear, feel, smell, taste. It is, for many, a very powerful experience. Afterwards when I ask people to share what they experienced, wherever I do it, I get mostly the same reflections. “It’s quiet”. “There are no cars”. “There are bicycles everywhere”. “I can hear the birdsong”. The responses are pretty much universal.

‘Motherload’ is a film about the cargo bike revolution building around the world. Cargo bikes are, for the uninitiated, like ‘bikes-plus’, bikes adapted to carry goods, children, pets, surfboards, firewood, farm produce, shopping, whatever (although not all at the same time). The film meets some of the early pioneers from the 1970s, who created the first models all around the world, some of whom lost their shirts by being the early pioneers before the rest of the world was ready. Visionary engineers who recognised the appalling impacts of car culture and who dreamt that there must be another way.

The core of the film is Liz Canning’s own story, going from being a keen cyclist to having young twins, then feeling the need to have a car and reaching a point where her cycling life felt like it was most likely over. Her life was transformed by the discovery of cargo bikes as a different way to get herself, her children, her shopping and everything else, around her city. In her enthusiasm she starts to connect to online cargo bike communities, and decides to make a film about it. She meets amazing passionate advocates from across the US, and the world. Her cargo bike becomes part of her own response to the climate crisis.

“Rethink the culture”. It’s a theme that runs through this film. A cargo bike revolution won’t happen by accident. The fact that the streets of Amsterdam are full of bicycles is not just because people in Amsterdam love bikes. It’s because in the 1970s, after sustained protests, the city was redesigned to be completely safe for bicycles. When the right conditions are created, cycling flourishes, a lesson observed the world over. “I know it’s going to happen. We just have to have the right infrastructure” she says.

What’s fascinating about this film is the degree to which the cargo bike revolution is driven by mothers, with 75% of users being women. It tells the powerful story of how the bicycle liberated woman at the turn of the last century, how it was connected to the suffragette movements and to the empowerment of women, and how a concerted campaign tried to discredit and undermine that.

Canning interviews many different mothers (and some fathers too), and their testimonies about why they sold their cars and bought cargo bikes instead are very moving. “The mundane became the extraordinary and I needed that in my life” says one. “The more I biked I realised I never wanted to drive my car ever again” says another. Can a mode of transport change your life? You bet it can.

I am always fascinated with ways in which we can communicate what a low carbon future would be like, what it would feel like, viscerally, if we get it right, if we create the best conditions for the imagination to flourish. And this film provides that, in a way I found deeply moving. The delight of cycling on roads free from cars. Of cycling 6 children around town on one bicycle. Of going surfing and carrying your surfboards on your bike. The delight of children being pedalled through town, feeling the wind in their faces, seeing the world around them, or just having a snooze. As one parent says “how many people do you see sitting on a freeway going ‘yes! I’m on a freeway!’ Exactly.

The film doesn’t gloss over the difficulties and the hardships of being a cargo bike rider. Abuse, threats of violent and actual assault are all reported by cyclists. Women cycling their kids around seems to especially trigger men behind the steering wheels of large cars. Appearances on TV or social media extolling the virtues of riding a cargo bike are often accompanied by insults and accusations of irresponsibility and selfishness.

It also has a fascinating section about how, in the event of natural disasters such as fires, bikes can provide a vital part of emergency preparedness, how they can move food, medicine and other kit around faster than cars, and meets cargo bike groups who are preparing for the worst and are on standby in case their area in California is hit with forest fires.

For many people, it really matters that their kids grow up with cycling as a part of normal life. “We want our kids to grow up thinking this is normal” says one. “What kind of stories am I telling my kids about the future?”, says another parent while reflecting on whether to make the jump to a cargo bike. It is hard to see any downsides. One mum even talks about how exhilarating it is to ride her cargo bike through the rain.

For me the most powerful aspect of this film was when it captured those moments of joy and delight that people discover when they make a change like this in their life, to sell their car and buy a cargo bike. Those moments of connection with their children, moments of interaction with other people, moments of feeling the sun on your skin, the wind in your face. Those moments when another world feels possible. “It brings you closer to everything” says one cargo bike owner. “It’s an enormous revolution that’s only just beginning” adds another, “it’s a tsunami”.

Canning makes it clear that she dreams of a “second golden age of cycling”, one that sees the decline of the car, the reclaiming of shared space, of civility, of adventure, joy, delight. I feel like there are moments in the film that beautifully capture those visions that appear in the heads of people attending my talks. This film is deeply inspiring, and deserves to be watched everywhere. Organise a screening, and see which “What If” questions it triggers. Brilliant. Just brilliant.

If you would like to organise a community screening where you live (and I highly recommend that you do), see here.