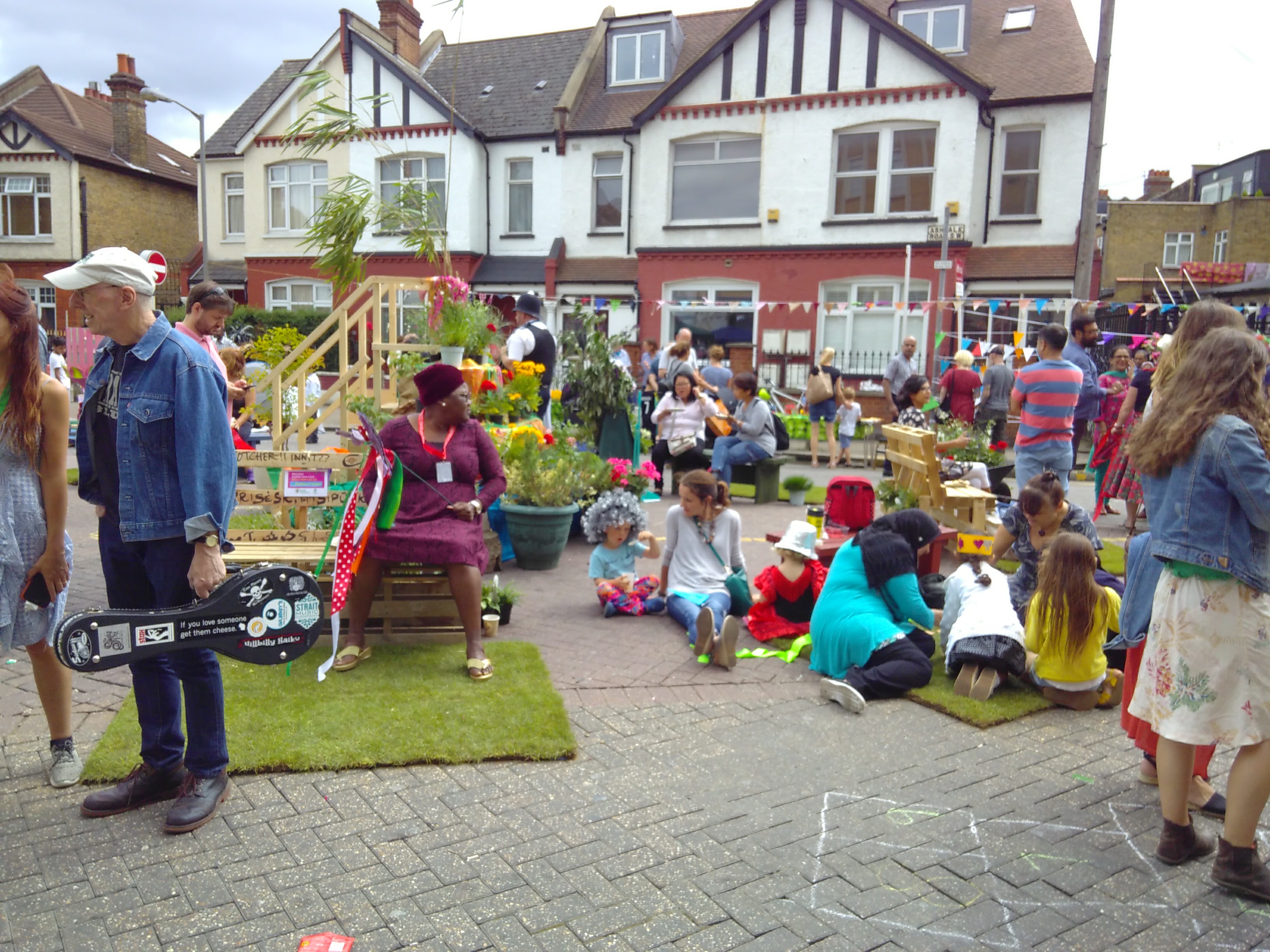 Audio: the Tale of the Tooting Bus Turning Circle

Here is the text in case you’d rather read it:

The bus turning circle off Tooting High Street in South London is an unloved place, home to buses idling their engines next to homes that overlook the constant coming and going, noise and exhaust fumes. Along one side, opposite the houses, is a huge Primark store. The circle is a place that is as unremarkable as it is unloved, a grey space people walk through without noticing, not a place people would ever meet or stop to have a conversation. Tooting itself is a district that lacks a centre, a heart, a village green, being largely strung out along its busy High Street, one of London’s main arterial roads. But if there were a centre to Tooting, it would be this circle. It is not a place that inspires much joy, carnival or creativity – and certainly not dancing in the street.

And so, one Sunday in July 2017, having crowdfunded nearly £2,000, a team of volunteers set about transforming the Tooting circle into a village green for a day. The buses were routed down the road, and volunteers brought out benches, erected a speakers’ platform, rolled strips of grass onto the tarmac, and decorated with potted trees, wheelbarrows full of potted plants, handheld windmills, bunting and an arched entryway for people to pass through as they entered from the High Street. A ukulele band and Sikh dhol drummers provided the music, alongside instruments available to anyone who wanted to strike a chord. Complimentary food was provided by a local restaurant as the smell of Ethiopian coffee wafted through.

The local Neighbourhood Plan group showed up (making use of legislation that enables communities to create their own, legally recognised, local development plans), as did a guy named Dr. Bike, who fixed people’s bicycles for free. The newly elected MP for Tooting, Rosena Allin-Khan, dropped by to give a short speech. Kids made drawings and brought them to life with a pedal-powered zoetrope. Other kids played in the street, in spontaneous games of four square and hopscotch. One girl persuaded people to lie down on the road – a suicidal thing to do on any other day – and traced their bodies with chalk. Led by the drummers, a parade passed through it all, its participants twirling and turning in circles through and around the bus turning circle.

By the end of the day, the long wall of Primark, which anyone would normally pass by without even noticing, had become the focus of many conversations about what to paint on it – how to use it to tell the best stories about ourselves. I took off my shoes and socks on that sunny afternoon and felt the vibrant albeit temporary ‘Green Green Grass’ of Tooting between my toes, along with a sense of possibility that in a few years I might return to visit the newly inaugurated Tooting Village Green with even bigger, even more colourful, even noisier celebration.

In addition to creating an oasis of colour and creativity, the Tooting Twirl, as it was called, created something very powerful that day. Rather than asking ‘What would happen if this space were our village green?’ it was giving people a taste of what that would be like when it was the village green. As Hilary Jennings of TTT told me: ‘I don’t think it’s possible for anyone who’s been here today or walked through it, or walked past it, to not see this space a bit differently. Once you’ve seen it without the buses and you’ve seen it like this, it’s planted in your mind. . . . I don’t see how you could go back from that.

This chapter is about how we can start asking different questions – specifically questions that begin with ‘What if . . .’ and that help us unlock the imagination in service to the big challenges we face. It’s about more than the question per se, however. The question simply begins to open the door, creating a crack through which we might push and rush to the other side. It is an invitation as much as a question. It is a space we create and hold, and the question is the beginning of that, what the authors Eric Liu and Scott Noppe-Brandon call the move ‘from what is to what if’.  At a time when such spaces seem in short supply, ‘What if . . .’ becomes the perfect antidote to ‘There is no alternative.’

As TTT organiser Lucy Neal told me during the Tooting Twirl, the event created the expectation of change, seeding the idea in peoples’ imaginations, so that nobody can say that it isn’t possible. ‘What we have today is evidence’, she said. ‘When a proposal is made, no one can say it’s not possible. It is absolutely possible to move the buses. We’ve done that. The joy and the delight of this is to step forward a bit, to be a little bit daring and a little bit courageous, saying, “Well, what if ? What if we did that?” We have just played with that idea of what could be possible. But let nobody say after today that it’s not possible’.

What was so brilliant about asking ‘What if this turning circle were, in fact, our village green?’ is that left within it is enough space for other people to ask different questions, new questions, to consider their place, their role in it, and yet at the same time remain safe, held, celebratory – an element of freedom and an element of constraint. All too often that is not the experience of consulting others, where the outcome has already been determined by the organisers or experts, and there’s no role for others to step into.

What else makes a good what-if question? Ruth Ben-Tovim of Encounters Arts (who describe themselves as ‘a company of artists, producers, facilitators and change agents who are creating the conditions for a creative, caring, connected world in which all can learn to flourish, living together within the Earth’s ecological limits’) describes three key elements. The first is that the people asking it have to be genuinely curious because ‘the people you’re asking will have an instinctive understanding if the question is coming from a genuine place of curiosity and openness or not.’

The second is that it must be a question that can be answered in many different ways. It ignites a possibility of response from many different angles, and a trust that the responses will be accepted. And thirdly, it should offer a sideways look at something that triggers a moment of pause, ‘like lifting a curtain’, she told me, ‘a glimpse of something you can step into’. Neal, who often collaborates with Ben-Tovim, adds: ‘You have to hold your intention quite clearly, which is that it’s a genuine offer, that you’re not going to sell them a car or something! . . . We’re bombarded with such offers all the time.’ As Antanas Mockus puts it, ‘What people love most is when you write on the blackboard a risky first half of a sentence and then recognize their freedom to write the other half.’

There is also a necessary element of constraint, or limit, in this openness and freedom. Imagination without limits is like typing nothing into a search engine and expecting to get something useful when you press Return. Narrowing the target area is vital for firing the imagination, what the French call ‘bricolage’ – meaning ‘do it yourself ’ or a construction made of whatever materials are at hand. The storyteller Martin Shaw explains: ‘Boundless, endless freedom, oddly, doesn’t engender imagination. What engenders imagination for me is a deadline, and some limits.’ Poetic forms give writers shapes to work within, enabling them to create depth and beauty that resonate far beyond their apparent constraints, creating worlds that capture and fire the imagination. Paul Valéry wrote: ‘A person is a poet if his imagination is stimulated by the difficulties inherent in his art and not if his imagination is dulled by them.’

Fortunately – if we choose to look at it this way – there are many difficulties inherent in the art of solving the world’s biggest problems, plenty of constraints, and plenty of limits. One response to the IPCC’s 2018 statement that we need ‘rapid, far-reaching and unprecedented changes in all aspects of society’ is to kick against that, deny it, and say that it’s impossible. Another response is to look at it as a historic, once-off invitation to our brilliance.

What if we were to massively de-escalate the crisis of anxiety across our culture? What if every university declared a climate and ecological emergency and all of its courses were taught through that lens? What if we created a fossil fuel–free energy system within twenty years? What if every new house built generated more energy than it consumed? What if urban agriculture became utterly commonplace? What if our cities became huge biodiversity reserves? What if single-use plastics were something we only saw in museums?

[Here is the podcast I made on the day… ]