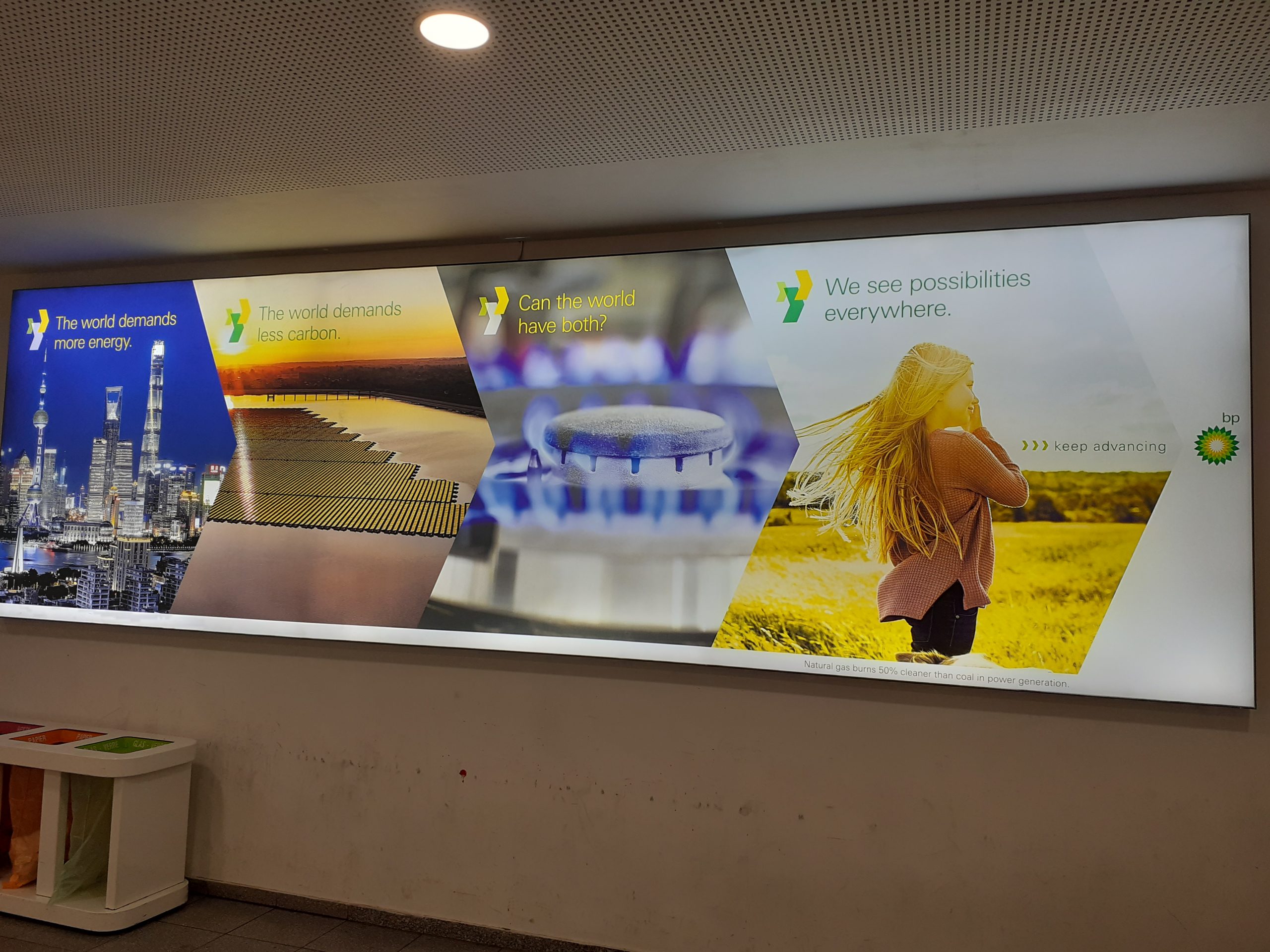 Complaining to Eurostar about BP’s hijacking of their passengers’ imagination.

As you may have noticed, as a committed non-flyer, I regularly travel by Eurostar. I love Eurostar. For me it is the low carbon option for getting to Europe, and I use it for that reason, as a conscious alternative to flying. As do many people. I found myself increasingly horrified by seeing, at their St Panchras terminal, video adverts on their large screens in the waiting area, advertising both Exxon and BP. The BP ads were especially galling, with their presenting of BP as the great bearers of the imagination of our times, portraying them as innovators of the low carbon economy (in spite of around 97% of their business still being fossil fuel extraction), under the slogan “we see possibilities everywhere” and some guff about how at some point in the future we might be able to run aeroplanes on apple cores (spoiler alert: we won’t).

Do they though? And might it be that Eurostar might be open to seeing the possibilities, once their attention had been drawn to the discrepancy between their image and brand as a cool, sustainable business and the reality of BP, of removing the ads? I was enraged, and so, on September 22nd of this year, I wrote an official complaint. This blog is the story of what happened to that complaint.

“Hello. I travel pretty regularly on Eurostar, and have become appalled at the ads you show on your screens in your St Panchras terminal for fossil fuel companies. On Friday you were showing both an ad by BP claiming that “we see possibilities everywhere” and one by Exxon claiming to be part of the solution to climate change. A recent study showed that between them, oil companies spend £200m a year on watering down action on climate change. Rather than “seeing possibilities everywhere”, BP are still resolutely a fossil fuel company still actively exploring for new reserves in spite of the science telling us that 80% of known reserves need to stay in the ground.

Exxon, we now know, have spent the last 40 years actively undermining climate science, and are involved in new oil field developments around the world. The UK parliament recently declared a climate emergency, and there is widespread recognition that this is a crisis. I visited your terminal fresh from the Climate Strike in Westminster, over 100,000 young people calling for rapid, deep and urgent action on climate change. Then I visit your terminal and you are allowing these companies to present themselves as part of the solution, which they are not. It is really not good enough.

This is a climate emergency and as a company you need to act accordingly. I use Eurostar as a deliberate choice because I don’t fly due to its climate change impact. To find the company I choose due to wanting to make the best choice in terms of climate change is advertising fossil fuel companies is just not good enough. Please take a stand on this, stand with those brave young climate strikers, and pull the ads. Please. Thank you.

“Thank you for emailing us with your feedback. It’s always really helpful to hear from our travellers about their experiences, so thank you for taking the time to send us your thoughts. I’ve passed your feedback on to the relevant parties and it’ll be used to help us keep improving how we do things. If there’s anything else I can do, please do get in touch”.

I waited. And waited. 5 weeks later, on October 31st, I wrote again:

“I wondered if I might expect a response to my complaint any time soon?”

On November 6th they replied. Our thread now ran under their heading of “Fossil fuel advertising – #05397051”:

“Please accept my sincere apologies for the delay in our reply. As previously stated in my email correspondent, that you feedback has been passed to the relevant department. Unfortunately, I`m unable to give you any information that what has happened, as it was dealt internally. If there’s anything else I can do, please do get in touch”.

Two days later on November 8th, a different member of staff contacted me:

“Thank you for your email. I am sorry that my colleague did not offer a response to your query. I have contacted our environment team and I will get back to you as soon as I hear further from them. Thank you in advance for your patience”.

I waited. Patiently. On November 13th, she replied:

“Thank you for your patience whilst I have investigated this for you. This has been raised with the relevant team and they are currently in discussions with the agency that is in charge of the advertisement space. I would like to thank you for taking the time to send in your feedback and I can assure you this has been taken seriously, given the concerns that you have raised”.

Then, nothing.  Two weeks later, on November 27th, I wrote again:

“Hi. Another two weeks has passed. I am wondering how complicated this is? I note also that in the Brussels terminal yesterday, the BP advertising has increased hugely, taking up a huge screen on arrival and a whole wall when you head for the train. This has now taken months to get a response. I’m really puzzled as to why?”

On December 1st, a third person contacted me. He wrote:

“Having read through the case I want to assure you that our management team have been made aware of your comments and are in discussion with the company providing the advertisement at the station.  I am sorry if the replies received indicated that you would receive an update of these conversations; however, these conversations are not being shared with us or with the general public, we will therefore not be in a position to provide any updates on this. Once again, I apologise for the disappointing advertisements and I hope to have assured you that your feedback is taken seriously”.

“Thank you. I’m afraid this is really not good enough. Very unsatisfactory. I wondered if you might be able to please put me in touch with the company responsible for the adverts at the stations? Is there someone in particular I should talk to? So many people use Eurostar because they want to travel with the minimum carbon footprint, and are horrified to see charlatans like BP using the stations to promote their greenwash. It doesn’t feel acceptable for this to just disappear with no actual statement from Eurostar about their actual corporate position in relation to fossil fuel advertising”.

Today I received their response:

“I am sorry that you are dissatisfied with the information provided in my previous email. Regrettably we are not in a position to put you in touch with the company responsible for the advertisements at the stations. Please be assured that we are reviewing the advertisement with the agency”.

And that’s that. It’s what my grandmother would have called “the right royal brush-off”. Am I really to believe that Eurostar are “are in discussion with the company providing the advertisement at the station”, and that “please be assured that we are reviewing the advertisement with the agency”? Really? I am not holding my breath. Last time I passed through the Eurostar terminal in Brussels it felt more like entering BP’s headquarters, so omnipresent was their branding.

And so I gather together in this place this correspondence with three hopes. Firstly, that if you travel by Eurostar, you might do likewise. I have no way of knowing if mine was the first ever complaint of this nature, or if they receive hundreds every day. The more people write, the more impact it will have. Use the complaints section on their website.

Secondly, I hope that Eurostar might read this, and might recognise that this is dreadful under-reaction to something that is really, really important. As the poet Drew Dellinger wrote in his poem that was immortalised on placards at Extinction Rebellion events around the world, “what did you do once you knew?” What Eurostar did, it would appear, was allow its stations to be used to spread the idea that oil companies who are adamantly refusing the leave the fossil fuel age behind and who are funding the slowing of action, are somehow part of the solution. It is a disgrace.

And my third hope is that, in the same way that brave and brilliant people are increasingly standing up on trains, on subways, in public places, and speaking out loud about climate change, including amazing young doctors and nurses who stand up in train carriages to say why they feel duty-bound to act on climate change, and to discuss it with people, I hope that people, myself included, will find the courage to stand up in Eurostar terminals and point out the true nature of the ads surrounding people.

I hope that when they (we?) do that, it will begin a shift, more effectively than my letter-writing seems to have been, that will see the removal of this toxic, nonsense, pollution from Eurostar terminals. We should all be able to “see possibilities everywhere”, and those possibilities have to include, indeed be led by, the possibility that oil companies disappear from our lives very soon, or reimagine their business model so that they leave 80% of reserves in the ground, becoming 100% renewable energy companies within 5 years. Nothing else is consistent with the science. Unless and until BP and others think and act big, in a way that is commensurate to the climate emergency, they have absolutely no right to wrap themselves up in the language of the imagination.