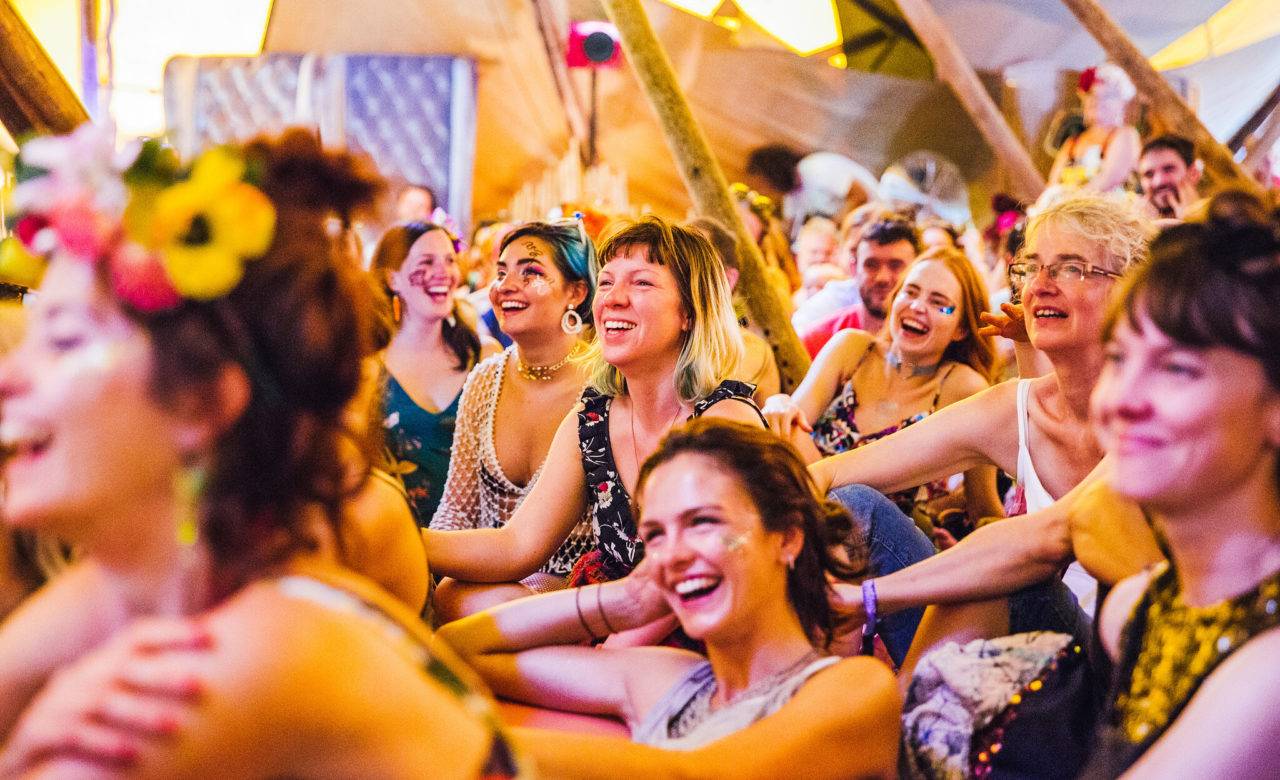 [A blog I wrote for the website of Shambala Festival. Original here].

In the summer of 2019, I invited the audience at my talk in a packed Imaginarium at Shambala (is there a better festival?) to make history. I invited them to join with me in attempting the first act of time travel in the festival’s history. They formed into pairs with someone they didn’t know, and closed their eyes.

I explained that we were going to travel, in our imaginations, to 2030. But this was not to be the 2030 of our nightmares, the catastrophe so often invoked by journalists and activists alike, but rather a place we hear far less of, the 2030 that turned out OK. I invited them to imagine that the years between now and then were a time of remarkable social transformation, which was unimaginable in 2019.

I invited them to imagine that, triggered by the Extinction Rebellion actions and the School Strikes for Climate, a cascade of positive change was unleashed, and that a momentum built that became unstoppable. The pressure for change came from business, from local government, from communities, from schools and universities. A hunger for a new culture built and spread rapidly. Cities were reimagined. As cars were designed out of city centres, huge amounts of space in need of alternative uses opened up (Paris is already starting to use its now no longer needed underground car parks to grow mushrooms in as traffic volumes dwindle and cycling booms).

The changes that unfolded were underpinned by social justice, community involvement and empowerment, and were focused on building a new, just, diverse, more resilient economy from the ground up, rather than an ongoing submission to extractivist business models. It was an 11 years that was characterised by remarkable change that future generations would sing great songs about, and tell great tales about the amazing, brave, focused people of that time. It was a time when we did everything we could possibly have done.

Shambalans joined me in a long, time-machine hum, during which they were to imagine themselves travelling forward through to 2030. As the hum died away, they sat in silence for a minute, taking their imaginations for a walk through the streets, the public spaces, the High Streets, the city centres, of this 2030 of their imagining. I asked them to use all their senses, to see what they could see, feel, touch, smell, hear or taste of this future world. The whole tent sat in silence. You could have heard a pin drop.

After a while, I invited them, keeping their eyes closed, to lean in to their partner and to share their experience, to describe the future of their imaginings. The tent filled with focused discussion, and with occasional tears. After a few minutes, I invited people to share their experiences. Reflections included “there was more birdsong”; “the streets were full of play”; “there was food growing everywhere”; “there was no homelessness”; “I was walking through markets of incredibly diverse local produce”. Many people came up to me after the rest of the talk to tell me they had found the experience deeply moving.

I have done that exercise with many different groups, from a small room full of company managers to 1500 people in a huge hall near Brussels. After one event, where I did it with a group of climate change activists, one woman said to me, “I’m just realising that I have been a climate change campaigner for 20 years, but I have never done this before. This ought to be a daily practice”.

So why does it matter? And why does an Imaginarium need to make some space for time travel? I have come to think that it matters because in these times where so much feels desperate, we need a North Star. We need to be able to imagine something before we can create it.

After all, before we landed on the Moon in 1969, we had spent decades visiting the Moon in song, story, imagery, film. Tintin had been to the Moon. Frank Sinatra had flown there. Jules Verne took us there. By the time Neil Armstrong took his first steps onto the surface of the Moon, we had all already been there hundreds of times, in stories, in our imaginations. We had created a deep longing to go to the Moon, and once you’ve created that longing, you create a degree of inevitability as to the outcome.

It feels to me like a big part of what we need to be doing now is creating longing, a deep longing, for a low carbon future. We often talk about the percentages of cuts needed in emissions by a particular date, but far less often about what, if we succeeded in doing that, it might look like or smell like, or what we might eat for breakfast in such a world. Researchers Jackie Andrade and Jon May from the University of Plymouth have coined a term for this. They talk about creating ‘memories of the future’. As Sylvia Plath wrote in ‘Johnny Panic and the Bible of Dreams’, “we must be moving, working, making dreams to run toward; the poverty of life without dreams is too horrible to imagine”.

Whilst it might be the case that, if you spend your time immersed in the conventional news output it may feel like nothing is happening, there are signs that we are moving towards the future the Imaginarium dreamed of faster than you might think. A recent survey in France found that 55% of people preferred a degrowth-based vision of the future, with more local, organic food and local resilience, substantially ahead of any of the other scenarios they were offered. The number of people flying in the UK looks to have peaked and is starting to fall as people decide they simply can’t do it anymore as awareness of climate change grows.

Consumption of meat and dairy is falling sharply. Towns and cities are falling over each other to be the most ambitious in their climate change responses, as almost 70% of local councils have now declared a climate emergency. Sally Longford, deputy leader of Nottingham City Council, recently said “if it stands still, we’re going to put a solar panel on it, and if it moves, we’re going to do everything we can to make sure it moves on clean energy.” Deep beneath our feet the tectonic plates are finally starting to shift.

Of course a tipping point into a better moment never feels like one at the time, you can only see if afterwards in the rear view mirror, even if the inkling of momentum was there. The important thing is that once you’ve tipped, and are on the downward side of the hill and in the clear, it feels completely different to the upside of the hill. On the upside, every step is a struggle. We are fighting gravity. It’s a slog. Two steps forward and three steps back. But on the downhill side, gravity is our friend. Things align to support us. Anything feels possible. Maybe, just maybe, that time is beginning. Our adventure into ‘What If’ at the Imaginarium may turn out to be more prophetic than you might think.