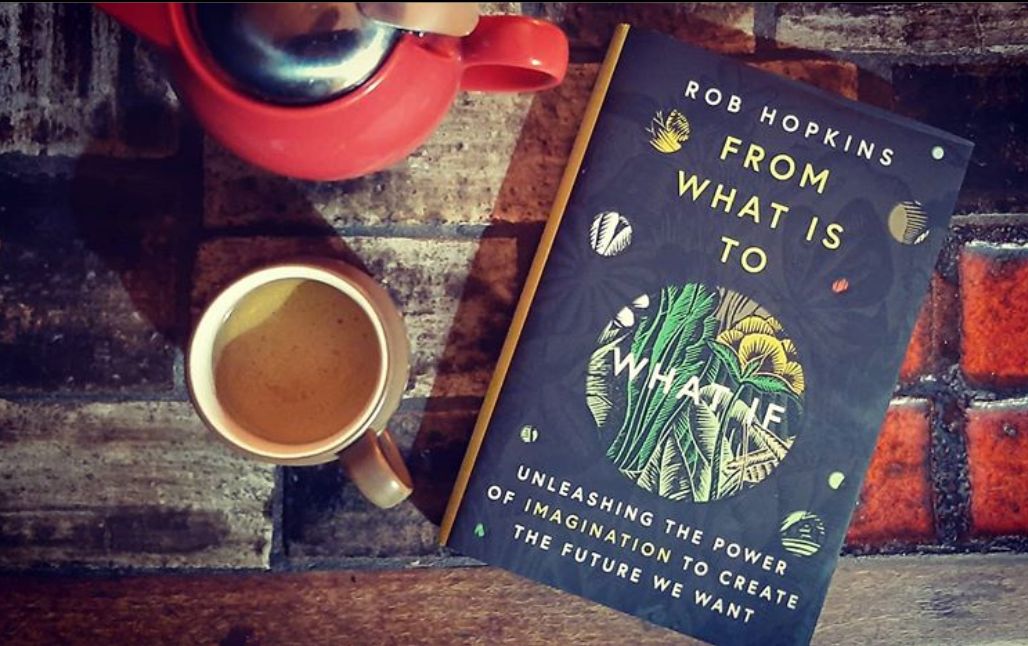 [Here is a new review of ‘From What Is to What If’ by Valentine McKay-Riddell, originally published here].

Normally a book review starts at the beginning of the book—that’s the logical progression, after all.  But having just finished reading Rob Hopkins’ amazing reimagination of the future, I’ll begin this review with a quote from his last chapter:

I dream that these twenty years when the climate crisis, the collapse of the world’s biodiversity, the unravelling of democracy and the multitude of other challenges converging on us with great urgency have been slowed down and even turned around, the years when the great rebuilding is well underway, will be the time of our lives.  I dream that because imagination is at its heart, it will be a time of great music, great writing, great conversation, great art, great dancing.  Our streets will fill with play and with the unexpected, with mime artists directing the traffic.  Our lives will fill with everyday awe.….What if the approach outlined here, and the great rekindling of the collective imagination, actually came to pass?  What if?  And why not?  (Hopkins, 2019, pp. 181-2)

From What Is to What If introduces the main premise with a question:  What if things turned out OK?  Rob shows us a world in which people walk or bicycle to jobs perfectly suited to their interests and abilities through lovely parks and urban gardens; housing is sustainably created and affordable to all; schools have free play, creative arts, and community-mentored skills training as required parts of the curriculum; and food is sustainably produced and distributed through local small farms and coops.

The next question, What if we took play seriously? is explored at length in the first chapter, and brought back a happy memory.

When we were children, my sisters and I had only a few toys.  Among them was a pair of stilts.  We easily learned how to use the stilts, but teetering around a few feet above the ground wasn’t nearly as much fun as turning them upside down, using the foot straps for reins, and galloping around the neighborhood whinnying and yelling “Yee haw!” as both rider and horse.  There were no cell phones, no personal computers, and television had just begun to come into its own—we were only allowed to watch it an hour or two in the afternoon, after doing our homework.  Children today would bemoan the lack of these stimuli, but we never missed them.

Our days were full of spontaneous games and unexpected adventures, keeping the boys out of our “girls only” clubhouse, and running barefoot after the ice cream truck over hot, freshly tarred gravel—while our nights were magical, spent capturing fireflies in jars (with holes poked in the lids) to use as fairy lanterns, until our parents called us in for bed.   Did we take this seriously?  Absolutely!  Ours was a richly interactive child’s world, bounded only peripherally by parental expectations and a few prohibitions—and quite unlike the world of children today.

Yet, the more of Rob’s book I read, the more delighted and encouraged I became.  In every chapter he outlines not just Western culture’s loss of imagination, innocence, and joy, but precisely how to regain these precious treasures, recounting story after story of cities, towns, and villages around the world where ordinary citizens have become inspired to create visceral experiences of the kind of future we all want (whether we know this or not).   Examples (each one experienced personally by the author) range from:

From What Is to What If? is so full of rich examples of how to reach that brighter future that there’s only room for a few of them here.  But if you’ve grown tired (as I have) of the posturing, political rhetoric, hatred, and violence that daily captures headlines in our newspapers, magazines, films, and television programs, that spews social media-driven vitriol through our cell phones onto our breakfast tables, Rob Hopkins will inspire you to keep on dreaming, to imagine and create the positive future we all remember and long for.