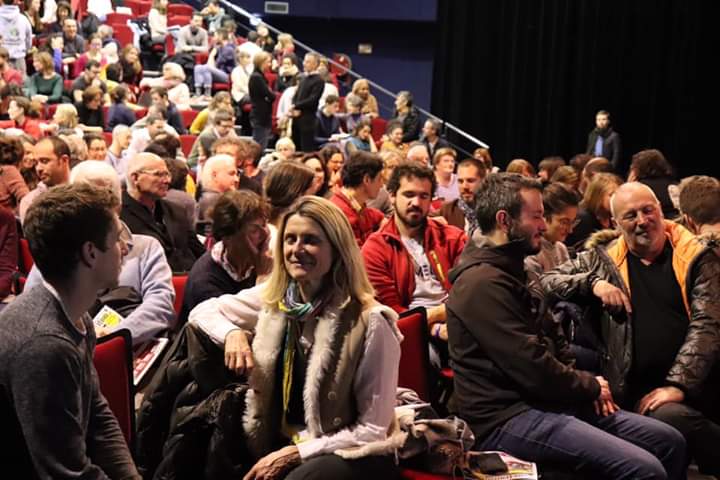 I’m just back from a six day speaking tour in France, organised by Sans Transition magazine. It followed on from a similar tour last year, hence this one being dubbed ‘Transition Tour #2’. It is an interesting time in France. It is pretty clear that across the country people are deeply unhappy with the current very rigid and hierarchical power structures, and regional government elections take place in March.

The first stop was in Lorient in Brittany, in a huge room at the football stadium of Lorient football club. In the afternoon, I did a shorter session for people involved in local organisations and businesses. Then in the evening, a longer, more in depth session with over 400 people. A really engaged, dynamic crowd.

We time travelled, we explored all kinds of different things, we reflected in pairs on the question “what if I were to act, right now, as though this were a climate emergency? What would I change?” It was a really good start, very positive.

Day two was spent mostly on trains, getting from Lorient to Aix-en-Provence (basically, from nearly at the top of France to nearly at the bottom). In the evening I gave a talk for Alternative Velaux. The venue was sold out (500 seats) and such was the interest, they said, they could have filled it twice. It was a lovely evening, such an engaged, positive, dynamic crowd.

Met loads of people afterwards, including Transitioners from various nearby places. All the English language copies of ‘From What Is to What If’ sold out. Books were signed, local beer was drunk, many lovely people said hello. A really magical event. Thank you so much to Alternative Velaux for inviting me and for organising such a great evening.

Next day we travelled to Montpellier, a beautiful city with a tram network that should be the envy of the world. During the day, I visited the offices of CommWatt, a company who are pioneering an amazing piece of technology which enables people to make better use of the solar energy they generate on their roof, by synchronising their appliances to when energy is being generated.

A quiet corner in Montpellier

I gave a talk in the evening at the Montpellier Business School who were great hosts. A packed lecture theatre and a really dynamic evening. Always interesting to bring new thinking, ideas and possibilities into business schools. Great questions and connections, including someone who brought 1000 ginko biloba seeds for me to distribute at subsequent talks! I’ll bet that never happens to Milton Friedman.  The curious world of a travelling Transitioner….

Then it was off to Vaulx en Velin near Lyon where, again, I gave two talks in one day. The first was my first ever presentation in a Planetarium. A dazzling place to give a talk, with, over our heads, a stunning, slow-changing, view from space.

It allowed me to talk about how amazingly thin the Earth’s atmosphere is, how incredibly fragile and delicate it is. That first talk was a talk to local professionals and different organisations. Then, after some food and conversations, was the evening’s big talk, with many people, great questions and lovely conversations afterwards.

Day 5 took us to Avignon for an afternoon talk at the University. Avignon is a beautiful city, and the day there started with interviews and stuff, followed by a talk to a sold out lecture theatre which was great fun, a really engaged crowd.

Our time-travel exercise was very powerful, the questions were great, and everyone felt really engaged and present. Afterwards, I signed lots of books, met lots of people, and then we headed off to Malaucene, a village in the mountain which is home to Julien and Magali, the creators of Sans Transition magazine.

The final day of the Transition Tour started with a walk, with Julien, Magali and my interpreter Xavier around the beautiful old village, climbing to the former castle for a great view over the whole place. We walked to the village bookshop where I was doing a book signing, which lots of people turned out for.

Then, after a delicious lunch in the home of my hosts Corinne (whose bookshop it was) and Jean-Michel, we headed to Marseille for the final talk of the tour.

The talk was in the former printing works beneath the offices of the La Marseillaise newspaper, now a funky post-industrial venue for events. By showtime it was packed, and after an opening panel discussion about air pollution, a huge problem in the city, one largely ignored by the authorities, I did my talk.

Afterwards we had a great Q&A session. I noted that because this was the final night of the tour, Xavier (my interpreter) and I would now have to go off, get drunk, and smash up our hotel rooms. (We didn’t).

By the time I got home I had finished a lino cut I made of a drawing I did sitting in the garden before breakfast in the hotel near Velaux, which I carved on different train journeys. It is of hedges in the garden, behind which thundered a dual carriageway…

I would like to thank the whole Sans Transition team for their hospitality, amazing organisation and coordination, and for taking really good care of me. Thanks also to all of the tour’s sponsors, to Xavier and Rachel who interpreted for me, to Corinne, Jean-Michel and Elise for hosting me in Malaucene. And to all the wonderful people I met who came up to say hello. L’imagination au pouvoir!

One of the things we created for this tour was a French-subtitled version of the short ‘2030’ promotional film we made for ‘From What Is to What If’, the one where I talk a walk around the future. My thanks to the good folks at Sans Transition, Actes Sud, and to Xavier Combe for producing this…