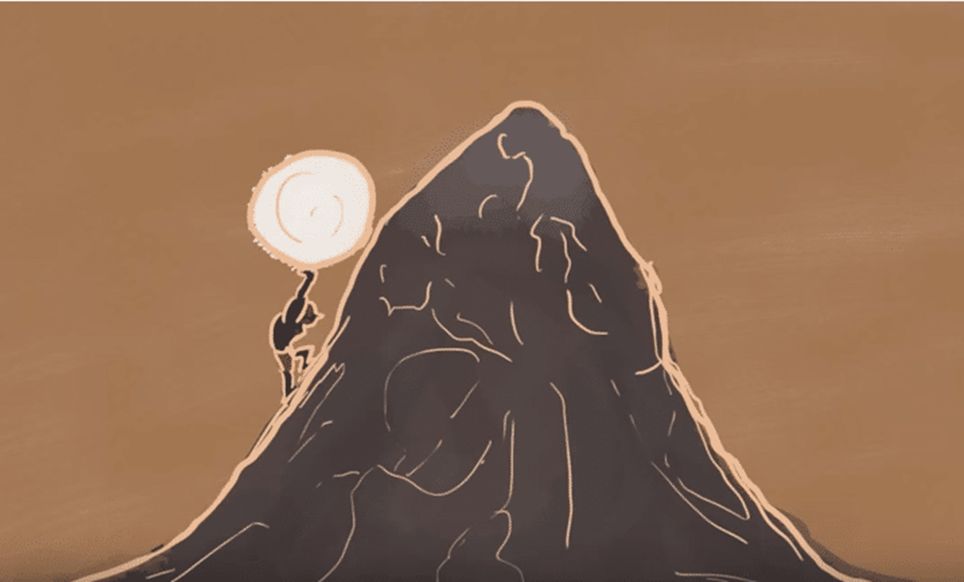 In Greek mythology, Sisyphus was condemned by Zeus to endlessly try to push a large rock to the top of a hill, an activity Zeus had rigged so that as it neared the top, the rock would roll away from Sisyphus. The story captures the ultimate in frustration and activities that take all of our energy but with no end in sight. The whole exercise was rigged against Sisyphus from the outset. The poor sod was never going to beat gravity. Even though it was Zeus’ punishment for Sisyphus’ supposed hubris, you have to feel for the guy. Indeed if you’ve been involved in activism or campaigning or activism on climate change or any of a range of other issues, you’re probably finding yourself identifying with him right now.

That’s what it’s felt like for many years, particularly in relation to the climate and ecological emergency, and to social justice activism. Trying to generate real change has felt like trying to push a rock up a hill. It has been exhausting, relentless. We have been pushing against the gravity of the culture around us, of the media, the mass culture, the investment decisions of large corporations and entitled elites, advertising, the media. Arguing for the deep transformation of our culture that these crises demands has been a lonely road, with all the norms in our culture painting us to be extremists, deluded idealists, naïve fools or, as Donald Trump recently labelled climate activists, “Prophets of Doom”.

Reflecting in this way makes me wonder what Sisyphus dreamt of as the pushed and shoved his rock up the hill, sweat dripping from his brow. Did he at any point pause and wonder what the other side of that steep hill might be like if he got there? Did he allow himself to dream of how it might be to see that rock bounding off under its own momentum, of experiencing gravity as his friend rather than his enemy? How did he picture that other side of the hill? Or would it have been that the task of moving his rock inch by inch towards the summit was so all-consuming that he had no capacity left to imagine such a thing at all?

I feel right now as though we are at, or very close to, the tipping point on these issues, nearing the moment where the gravity begins to change. I have felt, since Extinction Rebellion and the School Strikes began, since Greta began her strikes, as though deep beneath our feet the tectonic plates have finally begun to shift. Slowly and imperceptibly at first, but definitely shifting. We’ve seen 65% of UK councils declaring climate emergencies. Where I live, we have seen two proposed gas-fired power stations refused planning permission.

We saw first Stansted, then Bristol, and then Heathrow airports refused planning permission on the grounds that this is a climate emergency. Then more recently, the proposed ‘upgrade’ of the A303 road that runs from Hampshire to Devon via Stonehenge may also be cancelled in the light of the Heathrow ruling, a  precedent the implications of which people are just starting to figure out. Banks are starting to back away from fossil fuel companies, and TV financial analysts are announcing that we are “in the death knell phase” of fossil fuels and that they are “the new tobacco”. Most of this, let me remind you was, a year ago, unimaginable.

All of which makes me wonder, and begin to dream, about the downhill side of the hill, in a way that Sisyphus probably never allowed himself to. Indeed, as I argue in ‘From What Is to What If’, in those moments of overwhelm, with no space, no capacity for reflection and daydreaming, our ability to think imaginatively and hopefully about the future is greatly constrained. Hence the need in our movements, in our campaigning, to create space for dreaming, for imagining the future we would like to emerge as a result of all this.

How would it feel to be on the other side of the hill, doing the work we do in a context where gravity is our friend? In a context where policy-making, and finance, and cultural norms are behind what we do, not in opposition to it? It would feel like a very different world, where policy and funding come to be in service of the rapid transition, where culture and stories of what’s ‘normal’ rapidly change, where the social permission for flying and other high carbon behaviours rapidly shift. From our position on this uphill side of the slope, it’s hard to imagine it, but imagine it we must. Sometimes on my travels, I see places where it has already tipped.

There’s the guy I met in France who 3 years ago started a business composting food waste from businesses, and for whom the first 2 years were exhausting and no-one was interested. Then, something tipped, and now he can’t keep up with demand, and is having to grow his business in a way that was unimaginable. There’s the French town who now grow 70% of the food used to feed the kids in the town’s schools who are finding the most interesting thing is how it is shifting parents’ behaviour in a way they could never have imagined, with 60% of parents who never brought organic food now making it at least a part of their weekly shop. And there are many, many such stories, people who are sensing the lurch in the stomach you feel at the top of a roller coaster.

We may well look back to these very days we are living through right now and see them as having been the tipping point.  The important thing about tipping points is that you don’t recognise them as such at the time. You can only really see a tipping point in a rear-view mirror. But maybe, if we allow ourselves to be open to the possibility, we can get a sense of it at the time. Yesterday George Monbiot, announcing a legal challenge to the UK government which builds on the Heathrow decision with the aim of forcing them to abandon all new fossil fuel projects, tweeted “This, I think, is the point at which the tanker begins to turn … I’m beginning to see what winning might look like”.

This reinforces for me how important the imagination is in all this. If we allow the narratives we tell ourselves on the upwards side of the hill to exclude the possibility of the downward side, we do ourselves a great disservice. Convincing ourselves that somehow that other side doesn’t exist, or is impossible, reduces the likelihood of our getting there, of being able to recognise possibilities when they arise.

Of course none of this means that once we reach the downhill side of the slope we won’t find that we’ve left it all rather too late. It is no guarantee of victory. And it’s not as though the bogey-men disappear, or that the terrifying ecological trends magically reverse, or that people somehow suddenly stop electing madmen. But if we are to be able to do absolutely everything we possibly can do to avoid the worst, it starts with our allowing ourselves to imagine what it might be like to have gravity on our side, and how we might actually work, and celebrate, and grieve, and dance, and roll our sleeves up in that oh-so-different context, one where everyone gets a sense of “what winning might look like”.

I picture Sisyphus standing on the brow of the hill, hands on his hips, the sweat cooling on his brow, as he gazes, incredulous, at the entirely new and previously unimaginable vista before him, aware that the rock in front of him could now move under its own momentum when he chooses to push it, and the thought brings a tear to my eye.