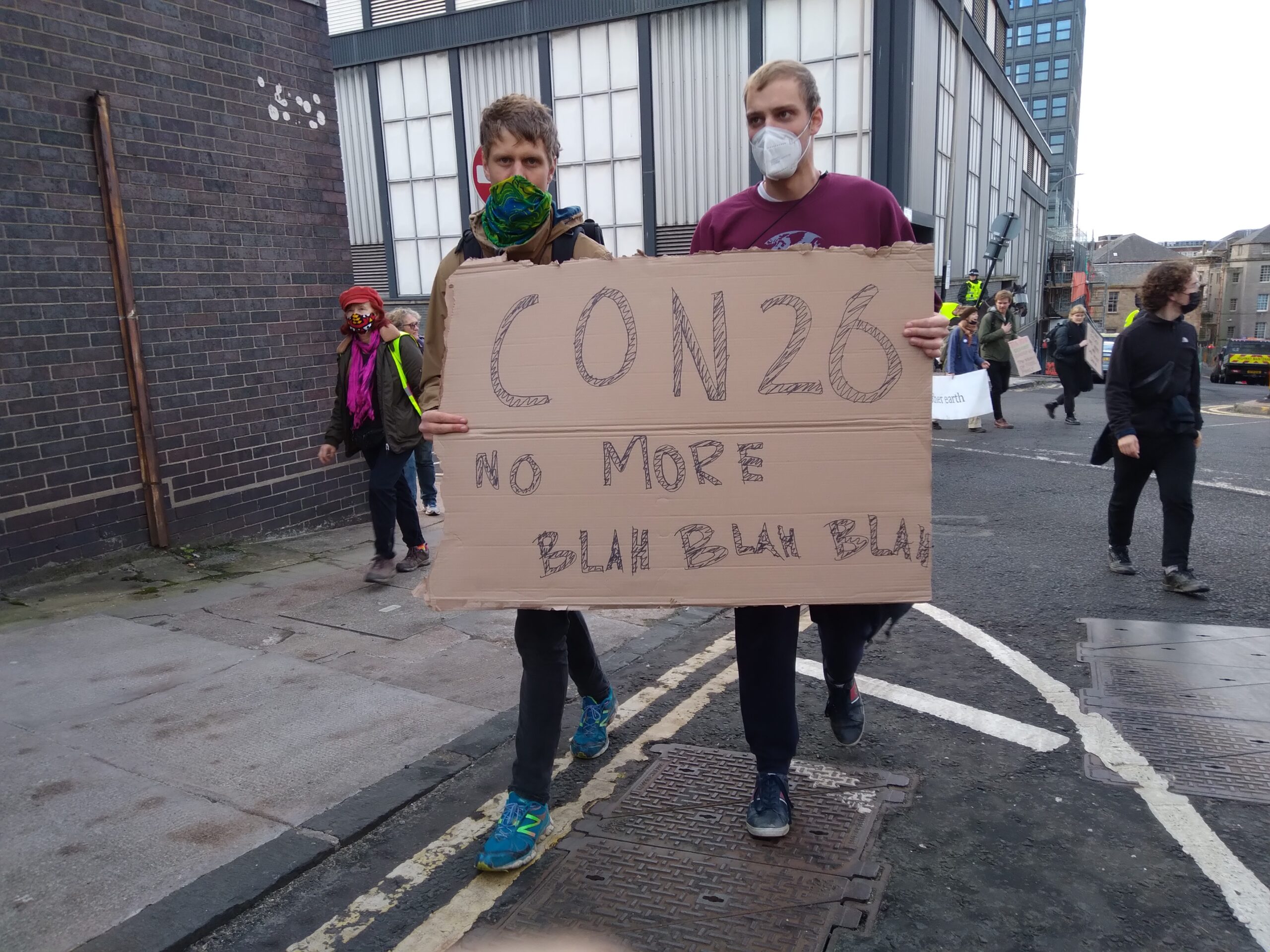 It is said that just before a tsunami hits, everything falls unnaturally silent. And that then, when the water arrives, it arrives not as a Hokusai-style foam-crested wave, but as a steady, unstoppable and relentless wall of water. It’s around midday on Friday in the centre of Glasgow, and it has fallen similarly, weirdly silent, apart from the noise of the ever-present helicopter overhead. The street is lined with police and barricades.

And then it begins. The front of the Fridays for Future march comes into view – loud, bright and passionate. It passes us and moves on, and the flow of young people dancing, chanting, waving placards both hilarious and heartbreaking (“you’re going to die of old age – I’m going to die of climate chaos”). It goes on and on and on. I stand, witnessing, with tears in my eyes. This is incredible.

We’re all here in Glasgow, as you’ll have noticed, for COP26, which while it’s the 26th COP in a long process, is really the last COP that matters. It’s fair to say that out here on streets, where I’ve spent most of my week in this welcoming and friendly city, there is little hope or faith immersed in the talks taking place in the Blue Zone by the River Clyde.

Greta Thunberg, speaking after the Fridays for Future march once they had assembled in George Square, called COP26 “a global greenwashing festival”, and an earlier young speaker from the Philippines called it “a celebration of false promises”. My friend who is working hard inside the process tells me “I have never seen quite such a collapse of confidence between the process and activists – really sad we have got to this point”.

As I wrote before the event, the issue at the heart of this for me is that many of those negotiating are stuck in the Bargaining stage of the 5 Stages of Grief, rather than having moved to the Acceptance stage. It is the many elephants in the room of this process that are doing it the most harm. Oil and gas interests remain a strong presence at the talks, dripping their poison of complacency into the ears of anyone who’ll listen. Unless COP26 sets a clear, enforceable timetable for the phasing out of the fossil fuels, and for leaving the huge majority of them in the ground, it will be worthless.

But while I remain open to being delighted at the last moment, and while I recognise and appreciate the many wonderful and committed people inside the process doing working so so hard, I don’t think that’s going to happen. And even if it did, we now know that perhaps the biggest danger to all this is that corporations now have the power to sue national governments in secret courts for taking steps to cut carbon emissions if it is perceived as impacting on their ability to make profits, a power already being made use of. This is massively dangerous and needs removing from the statute books as a most urgent priority.

Other elephants include the legacy and ongoing manifestations of colonialism, patriarchy and extractivism which remain unexplored in the process. As an indigenous activist from the Amazon told the youth strikers, “the same people who are funding oil and gas exploration in our community in the Amazon are all in the COP putting themselves forward as part of the solution”. The polarity in ambition was beautifully summed up by Greta at the rally after the march: “What are we fighting for? To save ourselves and to fix our planet, or to save business-as-usual? Our leaders say both. But they are incompatible”.

Much has been said about the derisory $100bn a year COP15 in Copenhagen promised to the global south to address the climate emergency, most of which has never materialised. Speakers at a COP21 Coalition event earlier that week talked about how, realistically, that figure should actually be more like $6 trillion a year. Which may sound like a lot until you realise that G20 nations have spent, since 2015, $3.3 trillion subsidising the fossil fuel industry alone. And that 30 of the world’s poorest nations spent 5 times more money repaying historic debts than they are able to do on addressing climate change.

The British government hosts have stated that the primary goals of COP26, from their perspective, are “cars, coal, cash and trees”. Patrick Galey has set out how, in order to show action on these four areas, the government are recycling old pledges and presenting things with no enforcement mechanisms as it they’re going to happen. UK government Chair of the talks Alok Sharma, told a meeting of bankers and investment fund managers “you are the new Swampys”, when that clearly, and on every level, is absolutely not the case.

Fossil fuel companies turned up in force. In spite of being told that oil and gas companies would not have access to the talks, they found ways in. The utterly shameless former UK energy minister Claire O’Neill’s World Business Council for Sustainable Development brought in a delegation including representatives of oil and tobacco companies. While I can imagine the spurious arguments oil companies might use for how they might have a role to play here, my mind can’t even begin to imagine how tobacco companies could in any way present themselves as having any role to play here whatsoever.

Bill Gates dropped in to tell everyone they needed to try harder, popping over from his £1.5 million a week rented yacht (7,000 tonnes of CO2 a year) where he had celebrated his 66th birthday by helicoptering his friends out to party on said yacht. Jeff Bezos came too to share his profound realisation of how fragile the Earth is, after seeing it from his ridiculous rocket, a realisation that didn’t lead to him reconsidering his taking a 120-mile round trip from his £290 million boat to his friend’s party before flying 2000 miles to Glasgow on his private jet. Clearly his intensely-felt realisation touched him deeply and has completely reshaped his worldview.

I turned up in Glasgow with nothing specific to do, but with a deep desire to be here and to bear witness. One of the things you realise after a few days here is that the best events always seem to be the ones you hear about the next day and had no idea were even happening. It’s a huge sprawling thing, from tiny events on street corners, exhibitions in cafes and incredible shows in church halls to huge multimedia events in theatres and celebrity talks in the Blue Zone. You can never do more than scratch the surface.

Here are some of the key things I got up to.  Among other things, I:

On my last day here was the main march, which was utterly incredible and which, in turn, made the Fridays for Future march look tiny. It went on for hours and hours, and beautifully represented the diversity of movements involved. It was colourful, loud, and huge. As we passed through the city, people leant out of windows waving in support, hanging out placards (including the memorable ‘Fuck Boris’), sheets with supportive messages and Scottish flags, and in one case, two young men clearly getting very stoned while playing ‘Anarchy in the UK’ loudly with the speakers next to the window.

It felt, again, like a tsunami, but this time way bigger than the last one. This week, the People’s Summit for Climate Justice will kick off, a parallel process trying to model what the real event should look like, a space for all the voices barely getting a look in inside the main space. All of this is not to say that nothing of any value is happening in the main process. A lot of money is moving into clean energy and out of fossil fuels. India’s pledge to generate half its electricity from renewables by 2030 is a big deal. Tipping points are being passed left right and centre. But the reality remains that where we are at now, at COP26, is where we should have been at COP15, ideally at COP1. And how many of the UK government’s pledges being made over this fortnight will actually be met? Already one prominent Cambridge scientist is saying very few of them.

So here’s the essence of all this, as Lewis Akenji set out in an event I was part of on my last night called ‘Is there Hope?’. Referencing the 1.5 Degree Lifestyles report he co-ordinated, he said the average UK carbon footprint today is 8.5 tonnes a year. By 2030 that needs to be down to 2.5 tonnes, and by 2050 it needs to be 0.7 tonnes. And the richest 1% are on track to be averaging 70 tonnes per person if current trends continue. How do we make shifts on that scale, while also creating a fairer, more equal and beautiful world?

Rebecca Willis of Lancaster Environment Centre put it beautifully on Twitter when she wrote about how journalists keep asking her how optimistic she feels, to which she now replies “that’s the wrong question. I don’t think the question is optimism or pessimism. Instead it’s determination or despair”. And so I leave Glasgow not optimistic or pessimistic, but infinitely more determined. And feeling like the power, the flow, the surge of Friday and Saturday’s tsunamis will carry us forward. I feel it at my back, I feel it in my stomach, and I will feel it forever.