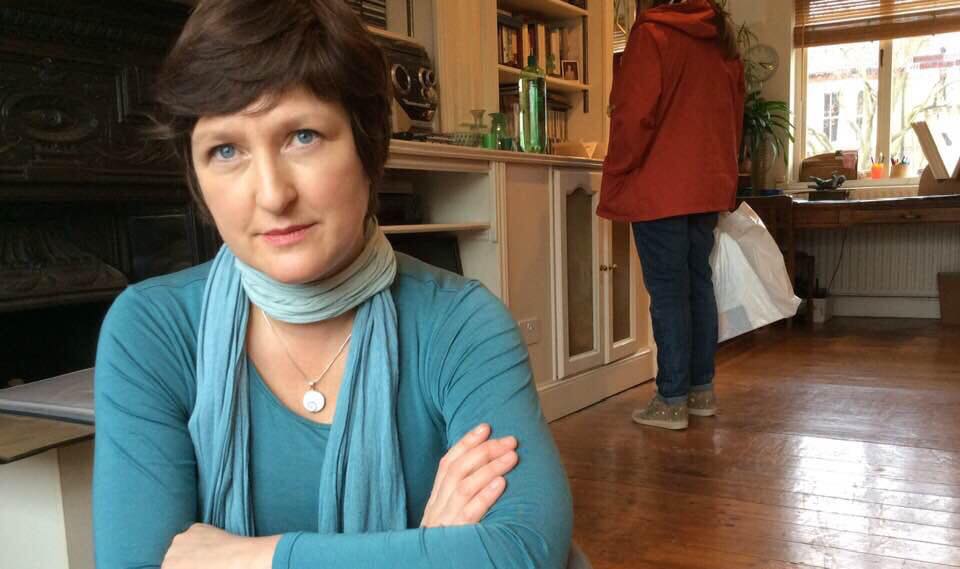 My time is running out and my deadline is fast approaching (March 1st). Although I’ve done almost 100 interviews for this book, there are still some I’d like to do, but time has got ahead of me and I am now just head down writing and editing. One of the interviews I was going to do was with Bridget McKenzie, whose blog I adore and which has many overlaps with our conversations here. Sadly, time run out on me. But not to be defeated, Bridget very helpfully read through previous posts, pulled out the questions she thought I might have asked, and interviewed herself! She asked me to explain she wrote it in a hurry, so it might not be perfect. I love it, and perhaps if more of the people I had interviewed had done the same, my life would have been a lot easier! Thanks Bridget. Original here.

Rob Hopkins was going to interview me for his book on Imagination (and how it can be socially and environmentally transformative), but it didn’t happen. So, I’ve imagined that he has interviewed me. I’ve taken some of the questions he’s asked others and asked them of myself. A lot of Rob’s interviewee choices and questions are about how we imagine the future and its best possibilities. I really wanted to share with Rob my thoughts about being Possitopian, and perhaps have these thoughts challenged and extended by that conversation. So here goes with my imaginary conversation, and maybe you (readers) can challenge me.

What do you that involves the imagination?

I’ve worked in cultural education and public engagement for 30 years. 10 of those years were in three proper jobs, including Education Officer for Tate and Head of Learning at the British Library. In the other 20 years there have been literally hundreds of projects, initially in trainee or voluntary roles, and then more recently as an independent consultant. All this work has been about stimulating imagination, providing resources and space for it, giving it expression and direction. It might be projects to do with science or environmental understanding – using the visual arts to explore nuances or to see from another perspective. It might be strategic national projects to ensure that the imagination is valued within children’s lives and education.

The big project occupying me now is establishing a Climate Museum for the UK, which is about creatively stimulating a response to the planetary emergency to encourage people to talk about climate change, to learn about all the systems and connections around it, and to imagine possible ways of pushing through it.

If you could go back to the beginning, and formulate what your initial enquiry was that set you off on this path as a ‘what if’ question, what would it have been?

It’s hard to trace back, as there have been so many beginnings. In general, I’ve asked, ‘what if effective learning and change depends on divergent and imaginative thinking being balanced with methodical, critical or convergent thinking?’ It’s quite nerdy but I’m pushing back against loose or enthusiastic campaigns for creativity, which often don’t define its range of qualities, contextual aspects, or denote the range of capacities needed.

More recently, my ‘What Ifs’ have been more applied to the climate and ecological emergency. What if we’re barking up the wrong tree arguing about how to communicate climate messages, when we should be focusing on enabling people to critique what is wrong and to imagine the best possible futures? What if the imagination is a central set of capacities for a just transition to a thrivable, regenerative civilisation? What if a new kind of museum could create opportunities for this kind of imaginative work?

And it relates back to my original ‘what if’ because:

The context is…complex to say the least, that our wasteful extractive lifeways are threatening the entire biosphere and stability of our climate, now and catastrophically.

Imagination can only flourish and generate new ideas when it is stimulated by constraints and challenges, and when people critique each others’ ideas.

The harder the context (e.g. resource insecurity, conflicts between people) the harder it will be to try out new ways of doing things. There won’t be enough time, or peace, or funds or materials for playing with solutions. We will need to model them abstractly instead. That requires technical and convergent thinking alongside open, visionary thinking.

This is really interesting and important research. It would seem to challenge the adage that creativity arises from adversity, for example, when some people manage to exhibit ‘positive deviancy’ after disasters or in hard times and try new ways of procuring food or shelter. I think there might be a sweet spot – quite a large sweet spot – between infantilised consumerist states (like the humans in Wall-E) where imagination isn’t needed but is exercised in fantasies and selfish obsessions, and those awful traumatised states where imagination can became overactive but repetitive or paranoid. When you say ‘their imagination shrinks’ I think this means that the potential for diverse visions, for sustained exercises of the imagination, for prototyping ideas in reality, are much reduced. In situations like these, the imagination grows monsters that feel real, rather than playful monsters that serve a cautionary purpose.

And it aims to do this by offering a whole range of playful and stimulating tools, or ‘loose parts’. (The Theory of Loose Parts was proposed in the 1970s by architect Simon Nicholson, who designed play environments. Loose Parts are materials that can be moved, carried, combined, redesigned, lined up, and taken apart and put back together in multiple ways.) We are at the start of a process of prototyping these, but they include illustrated books, games, artworks and raw creative materials. The Museum can be installed through a participatory workshop, where participants explore the elements and use them to design an experience that will best suit their situation and target audience. When it’s ‘installed’, there is still a lot of scope for the space to evolve, for loose parts to be played with by visitors.

But, crucially, and coming back to my original ‘what if?’ the installation has to include a clear sense of purpose or challenge – the climate emergency – so that creativity isn’t just expressed in a vacuum.

This is all extremely challenging, so I can’t say that we have the answers!

If dystopian futures are more exciting, what can best sell the idea of the positive ones?

I’m not sure it’s true that dystopian futures are more exciting, certainly not to everyone. They can offer compelling stories but they are not exciting to actually pursue (except for the fact that too many people are rewarded and inspired in modes of being that are hateful, destructive and damaging!)

One of the principles of Climate Museum UK is to be ‘Possitopian’.

This means both facing the worst and imagining the best, in ways that are both much more rational and critical and much more creative and open-minded. And also, much more frequently, in many more situations and permutations, with a greater diversity of people. Being possitopian isn’t a halfway position between glass half-empty and half-full. It is a greatly expanded perspective, a mind that is much more open to ecological realities beyond the human, to diverse perspectives and future possibilities.

We’ve seen eight years of increasing cuts to the arts in this country and a devaluing of art running through the education system. What’s your sense now of where our collective imagination is at? How you would rank its state of health?

I’d just expand this question to use the term ‘culture’ rather than ‘arts’. The cuts have eaten right through the cultural sector, including heritage, museums, design, science engagement and the arts. While all of these things have been devalued in this era dedicated to ‘jobs and growth’, there has been continued support for talent and virtuosity in the fine and digital arts (especially music) in parts of the education system. The elements that have been most devalued correspond to everything we need to invest in if we want thriving, collaborative communities pooling their imagination to steward the biodiverse world and to design regenerative economies.

Every school student should be learning about and designing with ecologically innovative materials, exploring biomimicry, growing food and cooking artistically as a way to love food and nature and to be healthy, turning their playgrounds into food forests and biodiversity labs. They need to be creative in ways that integrate all art forms, languages, and current media. And also they need to make in ways that integrate living materials with extracted resources (e.g. don’t just buy wood to learn joinery, but plant trees). It’s not just that the arts are devalued, but that children themselves have been devalued by adults failing to imagine the possibilities of the future their children are facing. We often read articles that say “we can’t predict the kinds of jobs that future people will be doing”, but then the same commentators go on to predict a world dominated by AI and self-driving cars. This limitation of the imagination is a betrayal.

So, the collective imagination is in a poor, febrile state, at least in the UK. We can’t imagine beyond Brexit, which has itself been tackled with so little imagination that there still isn’t even a plan that anyone can agree on. Those who do have foresight are imagining the worst scenarios of climate change, but are frightened. They are not being heard, or supported by any public institutions or industries to get into a state of preparedness for this change.

If you had been elected as the Prime Minister, and you had run on a platform of ‘Make Britain Imaginative Again’ – that you felt that given the challenges of climate change and so on, that we need the collective imagination to be as strong as possible – what might you do in your first 100 days in number 10?

If I imagine myself as a possible Prime Minister, I somehow inhabit Caroline Lucas. In fact, I’d rather she had that role, but if I could advise her, I’d suggest:

Announce the strategy by explaining the imperative of the planetary emergency, that this is not like having a ‘ministry of fun’ but that it will be hard and challenging work.

Set up an Imaginative Citizens Assembly: Invite applications by creative submission, including children. Employ artists and dramatists to help visualise and express ideas, but also philosophers, statisticians, engineers, scientists and so on to provide evidence and provocations for their discussions.

Introduce a MB(I)A leadership programme across all sectors of work and public life.

Start to shake up public broadcasters and Ofcom. Increase the output of coverage that faces the climate emergency while also stimulating creative thinking and exploring the possibilities of future solutions.

Obviously, put culture and play at the heart of education. Make schooling much more flexible and child-led, more like schools in Denmark or Finland.

Create a scheme for empty shops so that every town can have a ‘future-making factory’, or ‘possitopian hub’. These might be makeries, or food labs, or sustainable fashion labs, or thing-libraries, or anything people can imagine.

And, if I could be in this position before Brexit happens, I’d revoke Article 50 so that we could be less distracted by a damaging and divisive situation!