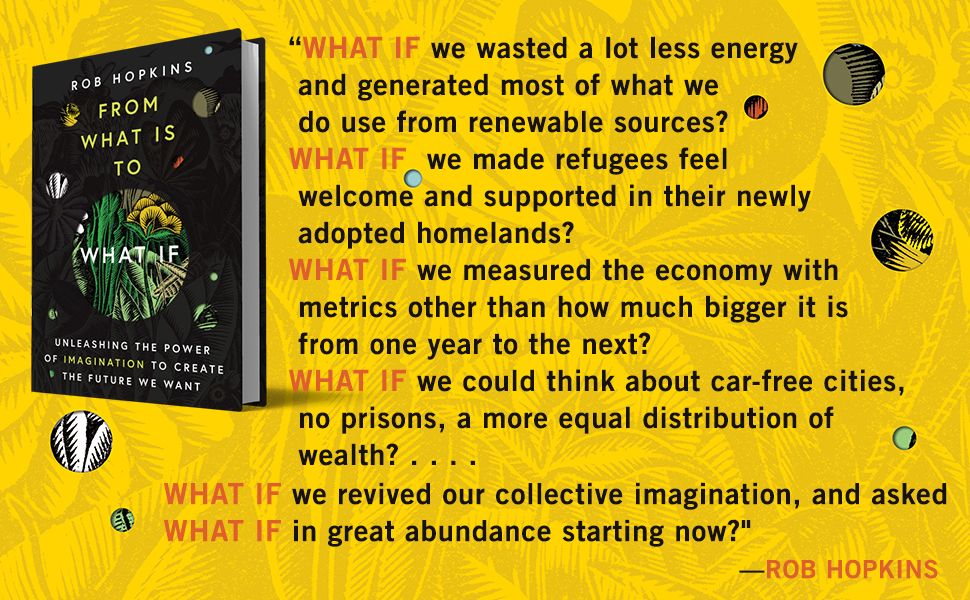 In the following weeks I found myself reading various commentators I admire also drawing my attention to the imagination. In 2016, the writer Amitav Ghosh had called climate change “a crisis of culture, and thus of imagination”. David Wallace-Wells, in his incendiary book ‘The Uninhabitable Earth’ wrote that in relation to climate change “we suffer from an incredible failure of imagination”. Yet at that point they all moved on to another thought, leaving me wondering why it might be that in 2019, faced with such existential threats, our imaginations might be failing us? What’s going on?

I then came across research by a US-based academic who evaluated data from the main creativity test done there since the 1960s, concluding that imagination and IQ rose together until the mid-1990s, at which point they parted, imagination going into a ‘steady and persistent decline’. When published, this research made the front page of Newsweek, and triggered lots of soul searching as to what the implications were for economic growth and Hollywood, but I realised I had never heard it referred to by anyone in the climate change and social justice community. That felt like an important oversight. I was taken back to Fleming’s comment. If we can’t actually imagine a different future, then how, and why, would we create it in reality?

I set off on a 2 year journey to try and explore a few key questions. Are we living in a time of imaginative poverty? Has society in 2019 created a ‘perfect storm’ of conditions that are undermining and eroding our collective imagination? Where can we see the best examples of imagination being revived? What would it look like if society valued imagination more than innovation, and made the cultivation of imagination its principal objective? Big questions.

I realised there was lots I didn’t know, and so I set out to read and learn as much as I could, to interview people who held pieces of the puzzle. I was keen to not interview the same people that many other books on climate change do, but to head out into new terrain, to surprise myself by the people I spoke to. And so it turned out. Of the more than 100 people I interviewed, only 20 or so were known to me before I started the book.

There were numerous ‘aha’ moments along the way. Finding out how the hippocampus, the part of the brain most linked to the imagination, is, of all the parts of the brain, uniquely vulnerable to cortisol, was fascinating. When we are stressed, anxious, traumatised, isolated, our hippocampus can shrink by as much as 20%, resulting in a contraction in our ability to think hopefully about the future, and in our imaginative capacity. I was surprised by the research on the degree to which spending time in nature boosted our ability to be creative, yet how much less time, on average, we now spend outdoors. I was shocked by the research on the impact that smartphones can have on our imaginations, and when one researcher told me “I would say that our imagination …. is probably on the decline exactly in the opposite trend of our time spent on smartphones”.

I came to feel that we live in the time of a ‘perfect storm’ of factors which are increasing the drip drip of cortisol and creating the conditions for the contraction of the hippocampus. To this list I would add much about our current education system, government-imposed austerity, the ‘age of anxiety’ we live in, the ‘disimagination machine’ of our current media and political system, economic inequality, our democratic system and much more. As I went on to write in the book:

“We recognise that if a population isn’t sufficiently nourished, we will see a decline in health and a rise in preventable illnesses. We recognise that if we fail to give a population a good education, it will fail to reach its potential. Yet the neglect of the imagination is generally overlooked, seen as a frivolous distraction from the overarching aim of building economic growth and technological progress … our imagination isn’t accidentally dwindling; it is being co-opted, suffocated, corrupted and starved of the oxygen it needs”.

But while the first part of the book aims to act like a ‘Silent Spring’ for the imagination, drawing our attention to something we are failing to notice fading from our lives, the rest of the book is a call to action, to signpost the way to a renaissance of the imagination. “What if”, it asks, “we lived in a time when the human imagination flourished and anything felt possible?” It tells stories from around the world of amazing projects that are putting the imagination at the centre of what they do, and in so doing are reimagining economics, democracy and change.

As I said before, this has been an unfolding exploration, and some of the best stories, such as Bologna’s ‘Civic Imagination Office’, I only heard about 2 weeks before the deadline to submit the manuscript! One person who sat in a workshop I gave on the book described it as being like being in a “positivity windtunnel”. I hope that parts of the book feel like that for you.

I really hope that you love it. I hope that it gets under your skin in the same way that its core ideas got under mine. I hope that it triggers a re-evaluation of why the imagination is important, a movement focused around the rebuilding of our collective imagination, what Tim Wu calls a “human reclamation project”. I hope that it fires you with possibility. I hope that it leads to the creation and passing into legislation of a ‘National Imagination Act’ and to every town and city having a ‘Civic Imagination Office’ modelled after Bologna’s. I hope it opens up new debates in the education sector and in politics. I hope that it inspires activists, just as they increasingly make space in their events for grief and sorrow over the scale of the climate crisis, to also make space for helping others to imagine how things might be if we did everything we possibly could.

It is a fascinating moment, the day when a book is born into the world. I have no idea where it will go, or what it will do. If it will sink like a stone, or fly like a bird. Whether you will love it or hate it. I’ve done all I can do. I just have to sit back and wait. When the Chief Executive of Shell says that the company has “no choice” but to invest in long term oil and gas projects, and when yesterday’s Queen’s Speech contains just one passing reference to climate change in a sub paragraph on international relations, you know that we have reached a point where the imagination of those ‘in charge’, their ability to “see things as if they could be otherwise”, has hit rock bottom. Perhaps a good time for a book about how we might set about rebuilding our collective imagination? Do let me know what you think.