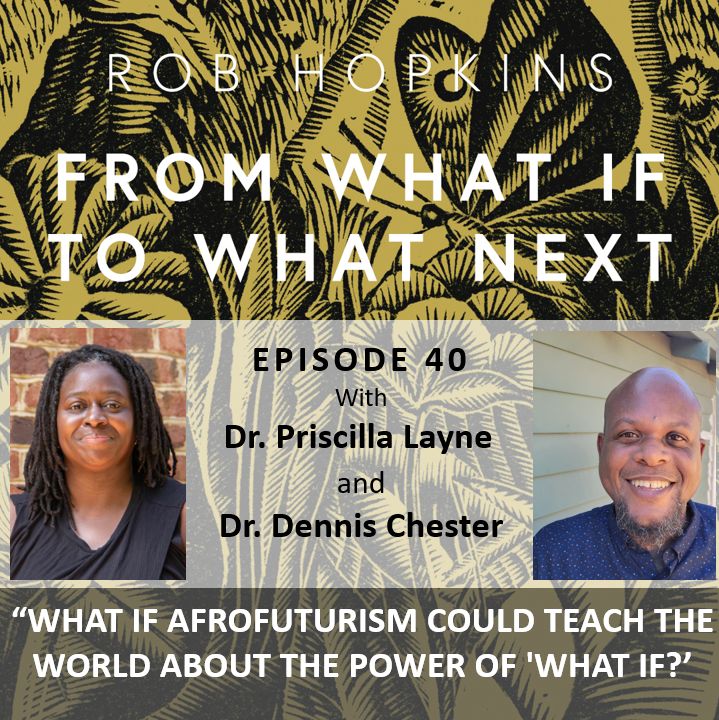 From What If to What Next: Episode Forty

I’m not going to say much about this episode, other than that it’s incredible. We are exploring Afrofuturism, which has been variously described as “speculative fiction from the African diaspora”, “a way of imagining possible futures through a black cultural lens” and “an intersection of imagination, technology, the future and liberation”. It has so much to teach us about imagination and how to keep What If questions alive over time. You will also hear the story of the Zambian Space Programme (a new one on me) which is just amazing.

My guests are both amazing. Dr. Priscilla Layne is Associate Professor of German and Adjunct Associate Professor of African Diaspora Studies at the University of North Carolina at Chapel Hill. Her book, White Rebels in Black: German Appropriation of Black Popular Culture, was published in 2018 by the University of Michigan Press. She has also published essays on Turkish German culture, translation, punk and film. She recently translated Olivia Wenzel’s debut novel, 1000 Serpentinen Angst, which will be out next year. And she is currently finishing a manuscript on Afro German Afrofuturism.

Dr. Dennis Chester is Professor of African American Literature at California State University East Bay (CSUEB) in Hayward CA. His interests include all manner of topics related to African American literature and culture with specialties in the Harlem Renaissance and in contemporary genre studies. Dr. Chester’s recent activities include published articles on African American crime fiction and presentations on Afrofuturism and the characteristics of Black speculative fiction. A recent Fulbright fellow, Dr. Chester is also very interested in the diasporic aspects of contemporary Black writing and exploring the ways that Black literature and Black people move within and across national borders.

I hope you love this, and do let me know what you think. And thanks, as ever, to Ben Addicott for making it all sound so great.